In the process of pultrusion, after the fiberglass (or other reinforced materials) is impregnated with resin, before entering the forming mold, it must be pre formed by a group of yarn guiding elements. The pre forming function is to form the pre formed body which is similar to the shape and size of the molding cavity according to the configuration of the profile section, and then enter the fiberglass drawing Extrusion die, so as to ensure the uniform yarn content of the product cross section.

The length of the pultrusion die is determined by the speed of the drawing process and the curing speed of the resin gel, so as to ensure the degree of demoulding and curing when the product is pulled out. Generally, the surface of die steel is chrome plated, and the surface of die cavity is required to be clean and wear-resistant, so as to reduce the friction resistance during pultrusion and improve the service life of glass die.

The key points of FRP pultrusion die design are as follows:

The design of FRP pultrusion die directly affects the traction force used in pultrusion process. If the traction resistance is too large, it is easy to cause mechanical accidents.

It is necessary to shut down the machine for mold removal and even repair the mold. It brings great inconvenience to continuous production.

According to the structural form, the forming mould can be divided into integral forming mould and combined forming mould. The integral die is made of integral steel, which is generally applicable to bars and pipes.

The combined forming mould is composed of upper and lower moulds.

This type of mould is easy to process and can produce all kinds of profiles, but there are traces of parting line on the surface of products. 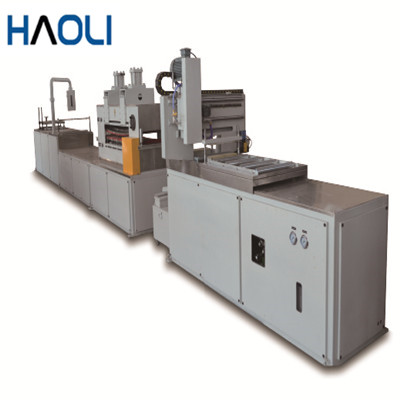 Haoli is the first manufacturer of  the pultrusion machinery and its tooling and accessories in China, providing world-wild professional services and the best quality products.
  0086-25-52453063       haoy@njhaoli.com
Mobile/Whatsapp:0086 13705151880